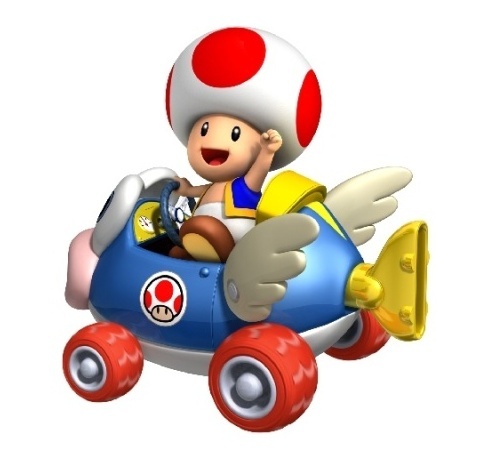 Toad is a lightweight character and drives only small vehicles. His best vehicle combos are the Booster Seat and Mini Beast. His female counterpart is Toadette, and because she looks a lot like him, Toadette is often named as either his sister or his girlfriend. Toad is reasonably fast and can drift very well in the game. He is recognized of having his own course, Toad's Factory, from Mario Kart Wii.

Toad is the name of both the species of mushroom people and the name of a major character called Toad. He appeared in all of the Mario Kart games up to date and is usually a light weight driver who has good acceleration. Toad has a female counterpart, Toadette, who first appeared in Mario Kart: Double Dash!! as his racing partner. As of Mario Kart 7, Toad has been in all of the Mario Kart games (including the two arcade exclusive Mario Kart Arcade GP games).In the Super Mario games, Toad is often portrayed as Princess Peach's attendant and is one of the Mushroom Retainers (Royal Guards). He usually plays a supporting role in these games however there are times when he is a main character as seen in the games Super Mario Bros. 2, Captain Toad: Treasure Tracker and Wario's Woods. The Mushroom item, along with the Triple Mushroom, Golden Mushroom, and Mega Mushroom, are all very similar in appearance to Toad's head.

Like his species, Toad is rather small being about the size of a baby. Toad appears wearing a blue vest with yellow lines in this game though he is sometimes seen in his red one as well as a diaper like clothing for pants. His cap appears an actual white mushroom with red spots on him. His role in the Super Mario series is always an ally to Mario, and usually a helper. He usually resides in Princess Peach's castle working as one of her servants though he is referred to as an attendant and sometimes as a guard. There are also many similar looking Toads that look like him.

Toad – known in Japan as Kinopio (キノピオ?) – is a fictional, anthromorphic mushroom in the Mario series, created by Shigeru Miyamoto. A citizen of the Mushroom Kingdom, Toad is one of Princess Peach's most loyal servants and is constantly working on her behalf. He is usually seen as a non-player character (NPC) who provides assistance to Mario and his friends in most games, but there are times when Toad takes center stage and appears as a protagonist, as seen in Super Mario Bros. 2 and Wario's Woods.

Toad's original role as a helper has been increasingly taken over by Toadsworth, causing Toad to appear less frequently than he once had in the main series; however, recently in New Super Mario Bros. Wii, two Toads (Yellow and Blue) appear as playable characters along with Mario and Luigi.

Toad is actually an individual in an entire species of the same name. It is noted that the majority of Toads have red mushroom caps and look completely identical to him; however, there have been Toads with a caps of different colors (like Toadsworth)

Many fans of the Mario franchise consider Toad as the boyfriend of Toadette. However, the Mario Kart Wii official game guide from Prima states Toad to be Toadette's brother. It's unconfirmed by Nintendo itself, though.

Toad's name is derived from the word toadstool, which is a type of mushroom. This is in reference to Toad's mushroom like appearance.

In Super Mario 3D World, Blue Toad is one of the main playable characters. In it, he is very similar to Toad from Super Mario Bros. 2. He is the fastest character, but also has the least powerful jump.

In NES Open Tournament Golf, he informs players when an O.B. occurs. In Mario Golf, he has his own course, called Toad Highlands. He appears on the Main Menu screen of Mario Golf: Toadstool Tour, and in the corner of the screen in all of the modes. In Mario Golf: World Tour, Toad can be unlocked as a playable character by collecting 40 Star Coins in Challenge Mode.

Toad is the main character of Wario's Woods. In it, Wario takes over a forest, and names it Wario's Woods, and brainwashes everyone that lives there. Then, he tries to take over the Mushroom Kingdom. Toad, Birdo, and a Sprite try to stop him.

Retrieved from "https://mariokartwii.fandom.com/wiki/Toad?oldid=47723"
Community content is available under CC-BY-SA unless otherwise noted.