Start a Wiki
The Super Bell is a powerup in the Super Mario series. It first appeared in Super Mario 3D World. It lets Mario turn into a cat. Then, he can run up walls, slide into enemies, use his claws, and climb up Goal Poles. It is similar to the Lucky Bell. Bowser uses it later in the game. 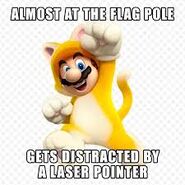 Add a photo to this gallery
Retrieved from "https://mariokartwii.fandom.com/wiki/Super_Bell?oldid=37575"
Community content is available under CC-BY-SA unless otherwise noted.