View source
watch 01:36
We're Getting Mutants in the MCU - The Loop
Do you like this video?
Play Sound

Straight offa the Super Nintendo Entertainment System, SNES Mario Circuit 3 (マリオサーキット３) is a simply designed yet still challenging track in the hills of the Mushroom Kingdom. The obstacles consist of oil splotches and randomly placed Green Pipes, as well as some painfully sharp turns.

The Retro Lightning Cup in Mario Kart Wii includes this as it's preliminary course.

The track takes place in the same setting as the other Mario Circuits from Super Mario Kart: a plot of sand in the middle of a valley surrounded by grassy mountains and trees, closed in with red, green, yellow, and blue (on Mario Kart Wii, the blue barriers seem to be sort of indigo colored) walls. The road is made out of gray pavement, lined with red and white borders along turns (Because Mario Kart cares so much about safety.).

So, the beginning of the circuit is marked by a "MARIO KART" banner stretching across the road, in the middle/left of the sand box. This track's design is actually very symmetrical, so a lot of turns will have an equal yet opposite partner turn. Going a little straight, players take the first of several U turns, where Item Boxes are provided right off the bat. A pipe lays off in the spike of the turn, preventing any early cutters from cutting. Another hairpin begins, going in the opposite direction of the other. The turning point on the "U" of this one is a little straighter, though. A Pipe comes out of the ground on each corner in the sand. Going straight for a few meters, the track starts curving right rapidly, again forming another hairpin turn around some dirt and walls. A puddle of oil lays on the otter edge of the path, punishing racers who are foolish enough to not Drifting as close to edge as they can. A new set of Items also comes up on this tight turn.

Goin' slightly over the normal 180 degrees, the road finally gets its first legitimate straightaway. But anyone who lets up their guard will soon regret it... a vicious U turn approaches. In fact, it could even be classified as a "V" turn. The difficulty of this turn is highly regarded as one of the hardest in Mario Kart history, as players usually end up sulking in the sand. Automatic drift mode usually won't do; a good, clean Manual drift is the best way of passing the turn. On the right side of the track, right after the sharpest turn ever, a line of 4 Pipes have been implanted into the ground. They may save racers from going off course, but it pretty much decelerates them completely, too. From here, the track starts to mirror itself, taking another decently long straight path, a row of Item Boxes on the ground. A U turn, barely over 180 degrees, probably 200, comes next. A large area of sand blocks what could be another straightway, so drivers have to detour around the section, where Pipes protrude at the corners and another oil slick is splattered on the edge.

The last hairpin turn, marked with a single pipe at the point of the sand wedge, follows, and then it's a clear drive to the finish line. A Zipper, one of the classic Boost Pads from Super Mario Kart, enhances players who can maneuver over it with a burst of speed to pass any stragglers right at the last second. 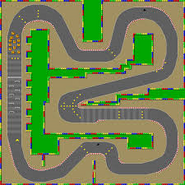 An overhead view of Mario Circuit 3 from Super Mario Kart.
Community content is available under CC-BY-SA unless otherwise noted.
Advertisement