Princess Daisy, or simply Daisy, is a female character in the Mario series. She is a Medium character just like her best friend Princess Peach. (except in Mario Kart 7, where she is considered "light" which is traditionally the lightest, but in Mario Kart 7 light is the second lightest, beaten by tiny.) She is a spunky tomboy, and loves flowers. Her wardrobe is very similar to Peach's, only she wears orange instead of pink. She is by far the best and fastest medium character in Mario Kart Wii. Her best friend is Princess Peach, and her boyfriend is Luigi. She is the princess of her kingdom Sarasaland. In Mario Kart: Double Dash!, every time she wins, she says "Hi, l'm Daisy," which is one of the things that made her infamous. There is a theory that she has a third eye on the back of her head, however, this was only shown in the back of her head of her trophy in Super Smash Bros. Melee. In the Super Mario Bros. movie, she is apparently half dinosaur and half human. 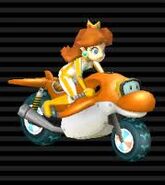 Super Mario Land is the first game that Princess Daisy appeared in. In it, it is revealed that she is the ruler of Sarasaland. Unfortunately, she is kidnapped by Tatanga. Mario then has to save her from him. It is unknown why Luigi isn't the main character in it, because he is her boyfriend, but it might have taken place before they met.

In the Mario Golf games, she is one of the strongest female characters. She was a playable character in two of them, and made cameos in the some of the others. In NES Open Tournament Golf, she is Luigi's caddy, and comments on his golfing during the game. In Mario Golf: Toadstool tour, she is a default character, and Star Daisy can be unlocked by defeating Daisy in a Character Match VS Challenge, and she and Peach are automatic partners in Doubles Mode. She is also a very powerful character with great Distance. Her Height, Spin, and Impact are pretty high. However, her Control is below average. In Mario Golf: World Tour, she is a default, playable character. Star Daisy can be unlocked by defeating Daisy in the Forest Course character challenge. A Daisy costume can be unlocked by the player's Miis collecting all of the Star Coins in the Forest Course challenges, and is again one of the most powerful characters.

The first game where Daisy was a playable character was Mario Tennis. She is a ''Technique'' character in it. She is Luigi's tennis partner, and Birdo is hers. She is the most powerful technique character in the game. Her Offensive Power Shot in Mario Power Tennis is Wonder Flower, and her Defensive Power Shot is the Flowerbed Return, and she has good power, speed, and lunge stats, and average reach. In Mario Tennis Open, she starts wearing an athletic minidress, and she has an unlockable costume for 700 Ring Shot points. In Mario Tennis: Ultra Smash, she becomes an all-around character, and reverts back to her original two-piece uniform.

Super Smash Bros. Melee was the first Super Smash Bros. game that Princess Daisy appeared in. In it, she was not a playable character, but had an unlockable trophy. It is available in the Lottery and Regular Match in all three modes. Her color scheme is on an alternate costume for Princess Peach. In Super Smash Bros. Brawl, Daisy had two stickers and a trophy dedicated to her. Her trophy is modeled after how she looks in Mario Strikers Charged. Her stickers are based off of Mario Party 7 and Super Mario Strikers. In Super Smash Bros. for Nintendo 3DS/Wii U, she has different trophies in each version. Wendy O. Koopa's trophy states that she sees her as a rival. She has three trophys in the Wii U version, based off of Super Mario Land, Mario Tennis, the Mario Baseball series, and Baby Daisy. A wig based off of her hair is also available for Miis to wear.

In Mario Superstar Baseball, the first baseball game Princess Daisy appeared in, she was a Balanced character. In Challenge Mode, she is the secondary captain on Peach's team. She has good chemistry with Peach and Luigi, and bad chemistry with Waluigi and Petey Piranha. Her Star Pitch is the Flower Ball. In Mario Super Sluggers, Daisy is one of the team captains. In it, she has good chemistry with Luigi, Peach, and Birdo. The Daisy Cruiser is her stadium. Baby Daisy also appears in this game. In Challenge Moe, she is on Peach's team. She is the Daisy Flowers's team captain.

In Super Mario Strikers, Daisy is an offensive-type captain with an orange number 9 jersey. She can preform the Torpedo Strike, and her default partners are a Monty Mole, a Koopa Kid, and a Toad. In Mario Strikers Charged, she is a defensive-type captain with high Movement and Defense, but low Shooting and Passing. Her Super Ability is Crystal Smash!. In Striker Challenge mode, she faces off against Peach and Waluigi.