White
King Boo is a large weight character in Mario Kart Wii. He is the leader of all the Boos.

Before the events of Luigi's Mansion, Professor E. Gadd captured Boolossus and put him in a Mansion.

In Super Mario Sunshine, King Boo is the leader of the Boos on Isle Delfino. He is a boss in Sirena Beach. If Mario defeats him, he can save Luigi.

In Mario Kart: Double Dash!!, he is partners with Petey Piranha.

In Mario Party 8, he gives out Stars on his board, King Boo's Haunted Hideaway. Players can also purchase Boo. 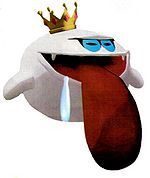 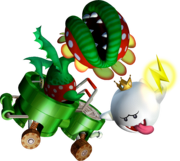